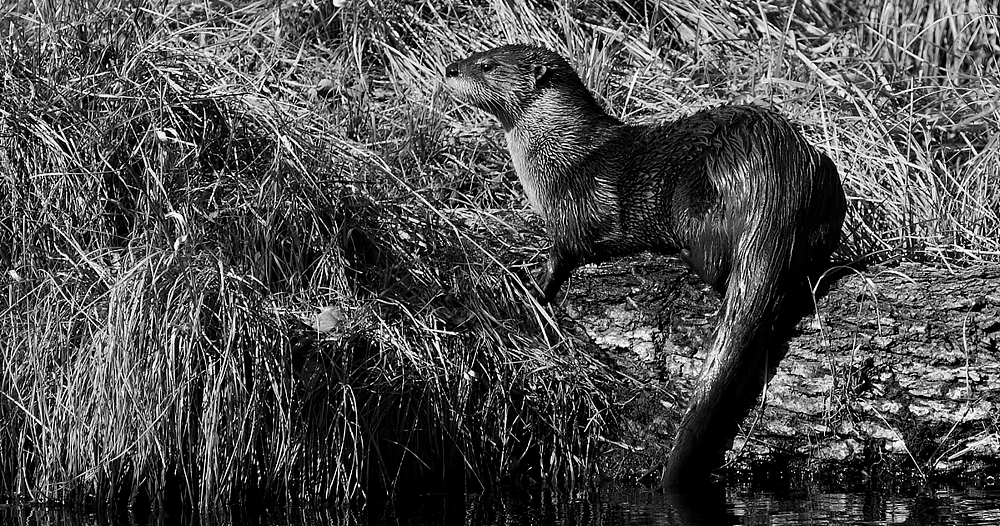 River Otters In The Wichita Mountains

I can still remember the emotions and excitement of the first close encounter with a river otter at the Wichita Mountains Wildlife Refuge.  In early February 2012 I received a few reports from the staff about otter sightings at French Lake and the Fish Lakes.  I spent a number of weekends and many hours hiking, sitting and hoping for that first good photo. Those 3 weeks of no results made that first encounter that much sweeter.  This was a definite boost of confidence that I could accomplish any goal I set at photography.

Early History of River Otters in the Wichitas

One of my historical heroes is Randolph Barnes Marcy. In the 1850’s, as a Captain in the U.S. Army he led an expedition through the Wichita Mountains. He was directed by Congress to “collect and report everything that may be useful or interesting”.  Between May 2 and July 28, 1852, Marcy’s party traveled over a thousand miles of previously undocumented Texas and Oklahoma territory, discovering numerous valuable mineral deposits as well as twenty-five new species of mammals and ten new species of reptiles. He recorded a prairie dog town that covered 400,000 acres.  He also discovered the sources of both forks of the Red River which was the main objective of the expedition. Additional discoveries included the Palo Duro and Tule canyons which he became the first white man to explore. The expedition encountered and documented the little-known Wichita Indians and he compiled the first Wichita dictionary.   On his recommendation a fort was established south of the Wichitas which later become known as Ft Sill.

Captain Marcy named a number of mountains, including Mt Scott and Mt Sheridan in the Wichitas. He also named Otter Creek, which is believed to be under what is now Tom Steed Reservoir.  He mentioned seeing river otters in large numbers in the area. Historical records show that Native Americans in the late 1800’s traded otter pelts at Ft. Sill.

Reintroduction of River Otters in the Wichita Mountains

In June of 1997 then Refuge manager Sam Waldstein wrote the Fish and Wildlife Service requesting permission to reintroduce otters in the Wichita Mountains.  He was granted permission in July to import up to six otters from the Bayou Otter Farm in Louisiana and to contact APHIS, the USDA Animal and Plant Health Inspection Service, about acquiring up to ten otters that would be live trapped around the Antlers Oklahoma area.  Over the next year eleven river otters were released in the French Lake area. Otter sightings by the public were rare until  early 2012.

The number of otters are now up to the point they can be spotted in all of the lakes on the public side of the refuge.  I’ve seen them in West Cache Creek, Caddo, Quanah Parker, Crater, Lost Lake, the Fish Lakes, and Burford Lake.   I personally believe the best time to see them is winter, especially when the lake is iced over.  Otters tend to get in a lake and stay there until spring. The best time for spotting them is right at daylight and in the afternoon.

Some of my Favorite River Otter Pics on the Fish Lakes

On March 1, 2012 I parked at the lot on French lake and hiked past the dam into the Fish Lakes area. I spotted my 1st river otter after 10 minutes, slowly working its way downstream.  I got off the trail away from the waterway to get ahead of the otter and waited for it to approach.  The area I selected was just below where Turkey Creek drains into the Fish Lakes.  I backed up into the branches of a large cedar and after about 20 minutes I was rewarded.  Much to my amazement one of the otters came ashore on the other side of the waterway not 30 feet away.

3 smaller otters entered an old beaver den as the adult relaxed on shore right next to the den.  The sound of my shutter finally spooked the otter enough to go into the den too, but not before I captured her sitting on a log.  That shot was my 1st award winning pic.  I later discovered the adult was a one eyed female well known to one of the biologists. The next year I would photograph her again at Lost Lake.

In December of 2013 I spent two days following 3 river otters at Caddo Lake.  I would arrive right before daylight and get as close as possible without spooking them.  I didn’t take a pic until the last few minutes of the second day hoping they would allow me to get close once I wanted to start shooting.  At the end of the second day I pushed the envelope and got very close to a rock next to the dam they loved to get on after catching fish.

The first few seconds of this encounter I thought I’d failed.  Two otters swam to the rock, one of them got on it, heard my shutter, and stared at me. The second otter just stayed in the water not sure what to do.  After another few seconds they both left.

But after a few minutes the otters returned!  The two with fish climbed up and started eating.  My experiment worked!  After they finished off the fish I walked away with some very nice pics!

The most memorable shots of otters have been under extreme conditions.  In February 2014 temperatures were in single digits and the wind chill was below zero.  By the time I returned to the vehicle my toes and fingers were killing me.  (That experience had me investing in better quality gloves and winter boots.)

In February of 2015 I was able to find river otters on the ice at Crater Lake.  I drove to Crater Lake before daylight, and could hear them playing on the ice.  I got my gear and hiked down below the dam and up to the other side of the lake (behind the large slab of rock the lake plaque used to be attached to before it was stolen).  By the time it was light enough to take any photos, I was already very cold and ready to return to the warm car.  I was so close to them, but couldn’t move around or stomp my feet to generate any heat.  They could hear my shutter, but all that was visible was my lens, and part of my head and arm.  So they weren’t alarmed and seemed to take an air of casual indifference.

The sun finally rose above the mountains to the east and brightened things up.

It was Groundhog Day and the otters saw their shadow.  We defiantly had another 6 weeks of winter!  By the time I got back to the vehicle I wasn’t sure I would ever get warm again.

I plan on doing more blogs that are species specific in the future.  Let me know what you think.

13 thoughts on “River Otters in The Wichitas”

or send me a Quick Message: